Information about all activities in Greece


The Erasmus + "R.E.S.P.E.C.T" program was successfully completed in 31 August 2018 at General Lyceum of Kato Achaia, Greece.

Detailed information about all activities in Greece is available on the blog:

The agreement was signed during the meeting of Erasmus+ team and Municipality representatives which took place in the Town Hall at 24 May 2018.
With this agreement both parts commit themselves to continue to work together in order to cope with the phenomenon of social exclusion of young people, the municipality through its policy for abolishing the social inequalities and the social structures at its disposal and the school by demonstrating its pedagogical approach and sensitivity to issues that may arise in school life.

Dissemination of our Erasmus + project to community ICELAND 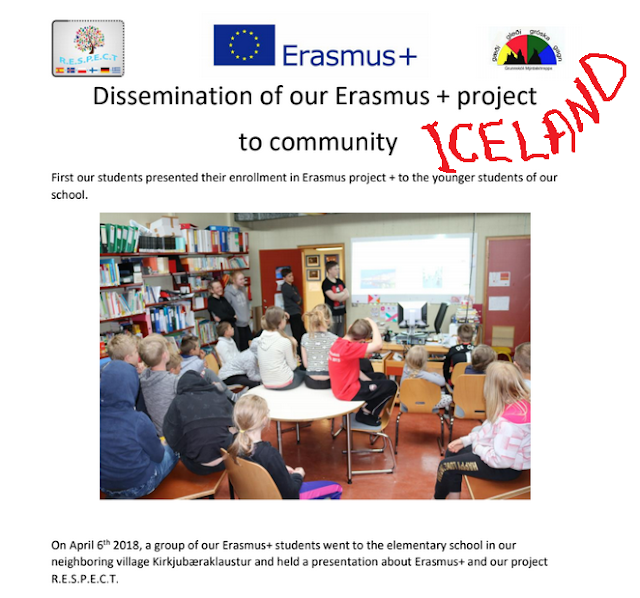 Examples of a few presentations of our students in Icelandic:

After our trip to Poland ...

The Results of Questionnaire II 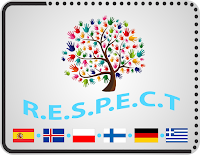 2. 56% of the students did not notice of any cases of bullying.

3. The biggest problem is verbal aggression.

4. Mobbing occurs most often in school (at breaks, several times a week).

5. The most common reason for bullying is the appearance.

6. Most perpetrators of bullying are usually classmates (both sexes).

7. Conflict begins usually by one person, and others join to.

10. Because of the bullying most people thought ‘not to go to school’.

1.    There are less of bullying and reducing phenomena  at our schools as a result of our “R.E.S.P.E.C.T.” project.

3.    Students have been mobbed more often once a week or once a month, not several times a week as previous.

4.    There are verbal and medial bullying at schools, but less physical bullying.

5.    Due to the project students pointed different school activities (mediation groups, ART, KIVA, SOR) as the most effective way to solve conflicts.

HERE YOU CAN SEE OUR QUESTIONNAIRE II RESULTS..